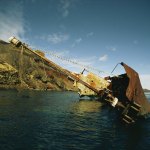 Nearing the finishing line now with the longest set of album liner notes ever!  Ha ha!  So… track 13 on “Escapism” is a song by the name of ‘From Shipwreck to Shore‘.

I’d say that the phrase “From shipwreck to shore” could probably define this album.  Let me explain this.   I was feeling shipwrecked.  I had been in a number of bands before I formed the Eleventh Hour Initiative.  I had released a couple of albums worth of material with varying degrees of success before I met Bill.  I had been favourably reviewed in magazines and gigged on the same local circuit as bands which have now gone on to bigger and better things such as Muse.  I played and recorded with phenomenal talents such as Seth Lakeman and Jonny Crosbie.  But by 2009/10 I was feeling washed up… jaded.  Normal life had not only caught up with me, but had settled me to the point of retirement.  When it came to being a musician, I was shipwrecked.

Bill wrote some really beautiful lyrics for this song, the last to be recorded for ‘Escapism’.  The song sounds pop – which I am always drawn to.  I like a good melody.  The song also has a sense of urgency, and for me at least, a sense of danger.  Danger and anger.  The “high wire” line is one of the most astute and exciting lines on the album.  Hats off to Bill for splendid lyrics throughout… but the words to this particular tune really push things forward.

Writing “Escapism” has been like being born again (musically… certainly not in the Stephen Baldwin sense!!!).  The album as a whole has been like a breath of fresh air.  The songs are all about this moment in time and have helped me to regain my musical mojo.  And yet you can never escape the past.  Many of the songs had roots in old ideas, never professionally recorded, but existing solely in my head or on 4-track cassette tape.  ‘From Shipwreck to Shore’ was once a song about a babysitter.  Let me clarify… the musical motif was once the basis of a song about a babysitter.  A song that I never recorded with a band and never released to the world.  I love how the same past that can break you can also make you.  I am aware that I sound as pretentious as Morrissey (and am semi-stealing his lyrics!), but this concept is what makes the world go round.  The same past that can make you bitter and twisted can then bring you out from the doldrums, eyes squinting into the bright light.  What doesn’t kill you makes you stronger and all that.

So “Escapism” has coincided with the re-emergence of Emrys as a willing songwriter – a songwriter that enjoys writing songs rather than simply ‘needing’ to write songs.  If I had to hang my hat on an album I  would happily hang it on this one.  It is the kind of album that inspires me – and as I had a hand in creating it I do realise how egotistical that sounds!!!  “Escapism” is an album that I would love to follow up.  I would be fascinated as to what kind of album the Eleventh Hour Initiative could create next.  But… to allow that to ever be a possibility we have to know that people have appreciated “Escapism”.  For while we can certainly do what we want to do as artists and to hell with the consequences… it would indeed help to have some of you along for the ride.  So, don’t hesitate to let us know how you feel about our songs, our album.  And please spread the word, for we have no machine behind us.  We have no invisible men pushing our presence on Youtube, manufacturing us behind the scenes as the next big thing.  There is no rope pulling or guiding us – and certainly no safety cord.  There is no svengali masterminding our world domination.  There is only Bill and I.  And you.

I found the shore.  From Shipwreck to the shore.  I now raise my head and observe the land before me.  And it looks just mighty fine.